The five members of Team A, who already swept away the audience with their charms on ‘WIN’, now return as members of the group WINNER. They are so ordinary yet are also like big celebrities, they look like your friendly neighbor and in another moment they are like professionals, and they are like your little brothers but also possess the charms of macho men. Kang Seung Yoon, Lee Seung Hoon, Song Min Ho, Nam Tae Hyun and Kim Jin Woo are back again to melt the hearts of many women.

Mnet’s ‘WINNER TV’ that was aired for the first time on Dec 13 featured the five members who are in full preparation for their debut after winning the battles on ‘WIN’. ‘WIN’ was a real survival program that put them in a battle with Team B, where Team A, the now WINNER, achieved victory. The five members were more like ordinary men in their early twenties, rather than celebrities. They left a very friendly impression on the viewers.

On the show, Psy, a fellow artist from the same entertainment agency, made an appearance. Psy said, “I talked to the members of WINNER briefly. They were so mature,” and added, “They are very popular already. In South Korea, I think they are more popular than I am.” With the comment, the five members seemed very shy and did not know how to react.

The official schedule of WINNER was revealed as well. They were scheduled to perform for the opening stage of BIGBANG’s Dome Tour in Japan. The founder of YG Entertainment, Yang Hyun Suk, commented, “This performance is very good for their career experience. This is an opportunity you couldn’t even pay to have.” The members devoted all their energy and time to deliver a perfect performance. They even learned to speak Japanese for the local fans. 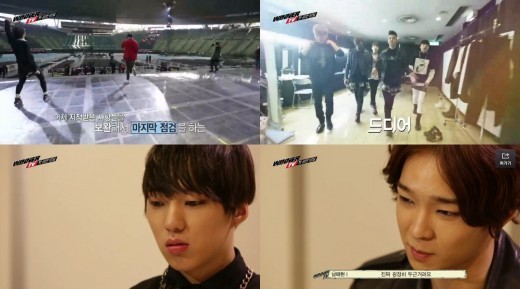 On the very first schedule to be carried out overseas, Song Min Ho commented, “It’s my first time flying overseas. The first and the last time was when I was in 6th grade, for a trip to Jeju Island.” It was obvious that he was excited by the overseas schedule, as he even named his suitcase.

They enthusiastically chose their outfits for the ‘airport’. Kang Seung Yoon, who made a debut in the entertainment world first, gave thorough advice to other members. To Kim Jin Woo who wanted to pack 6 coats, Kang Seung Yoon said, “You have a limited number of outfits. Are you going to show people everything all at once?” making everyone laugh. He continued, “I change my underwear once in two days. I don’t really sweat much,” getting the members suspicious of his comments. The members had a lot of fun teasing and being playful with each other, choosing their outfit for the airport.

The members were always playful on their way to Japan, and when they were in Japan. When they were heading to Japan for BIGBANG’s Japan Dome Tour, they burst out laughing look at each others’ passport photographs. When it was Song Min Ho’s turn to reveal his photo, he made people laugh by giving excuses like, “I took this photo at a train station. My philtrum is gone.” Lee Seung Hoon, looking at Kang Seung Yoon’s photo laughed out loud, “This is the best!!”

But these five playful members also know when to be serious. It’s when they are on stage. When they arrived in Japan and went to Seibu Dome, they were intimidated by the scale of the stadium. They said that they should perhaps just sit at the corner of the stadium and simply watch BIGBANG perform. Lee Seung Hoon said, “This makes me feel modest. We are here, thanks to BIGBANG.” Nam Tae Hyun commented, “This is the beginning for WINNER and for me, Nam Tae Hyun as well. My heart is beating fast.” In their final rehearsal, they were more nervous and serious than ever. And they stood on stage to reveal their full charms. In the next opening performance at Tokyo Dome, they will be even better, just like fishes in the sea. All eyes are on the five members to see what kind of potential and talents they will unleash on a stage they stand for the first time in their lives, and how they will steer away from their usual playful selves to show something serious.