The drama series is of (black) comedy genre which depicts the story of prisoners and staff at a prison. 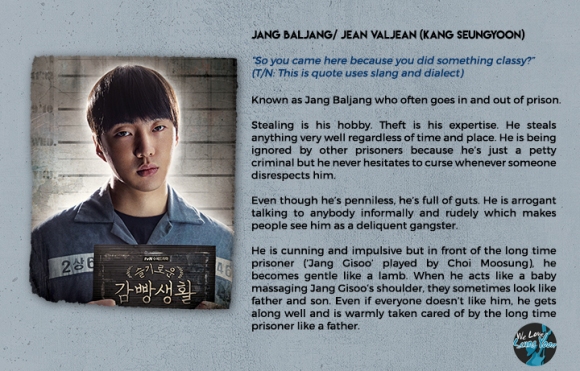 A/N: Jean Valjean is the protagonist of the widely popular novel/play/musical ‘Les Misérables’. Valjean came from a poor family with him and his sister becoming orphans after their parents died when they were were very young. These circumstances led Valjean to become a thief and eventually a frequent criminal offender and jail breaker.

[NEWS] 171130 Prior to Episode 4, Prison Playbook Releases Behind Photos!

Meanwhile, look forward to episode 4 where the prisoners will have a singing competition. Check tonight who will win the first prize!https://t.co/RWVDIjNmhj pic.twitter.com/MFWUncuf83

[INFO] Prison Playbook OST Part 2 titled 'Door' by #Mino & #Seungyoon (Prod by #Zico) will be released online 12 noon (KST) on the 30th! The song will depict the heavy emotions of the prisoners on light beats.https://t.co/7WI0DObAnW pic.twitter.com/zHFm6e6CoU

After receiving verdict, Kim Jaehyuk leaves the detention center and enters the Western prison. There, he will face more unpredictable characters & situations.https://t.co/z4Ra8qifjz pic.twitter.com/H0OZtNi5t6

UPDATE: Netflix has bought the distribution rights for Prison Playbook (Wise Prison Life) which will premiere online on 11/28.

A/N: Not sure why the synopsis is written like that but everything else should be right about PP pic.twitter.com/i85YEXsRPA

[PHOTOS] 171120 In celebration of D-2, photoshoot for poster revealed #3
Jang Bal Jang (Jean Valjean) who was caught in Australia!

[INFO] 171115 At the presscon of 'Wise Prison Life', Shin Wonho PD talks about casting Seungyoon. He didn't know he was from idol group WINNER & its been a while since seeing him on HK3. Yoon read a part of the script on the spot in satoori and brought the character to life! pic.twitter.com/sanFEOEEUm

A sneak peek of prison life!

You like YOF and ‘prison life’, anyways~
A ‘wise’ phone call with a ‘so cool’ PD-nim and a worried cast member!