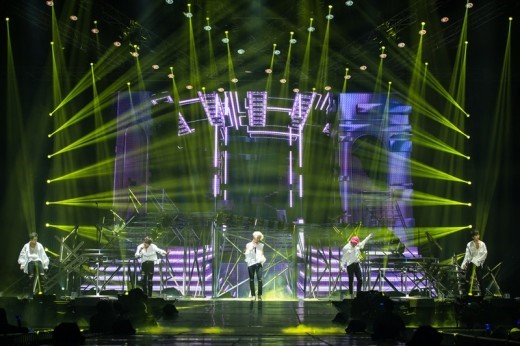 [TV리포트=김예나 기자] At their first solo concert, WINNER parodied their senior labelmates and brought special fun to the fans.

WINNER’s first solo concert was held at the Olympic Gymnastics Arena on March 13 under the title of “WINNER EXIT TOUR SEOUL” following the concert on the day before. At the concert, WINNER performed the hit songs of their debut album “2014 S/S” released in August 2014 and their second album “EXIT:E” released in February 2016.

After their opening stage, WINNER put on a variety of solo and unit performances to raise the excitement level. The first unit performance was by SONG MINHO and LEE SEUNGHOON. They sang “OKEY DOKEY”, the song SONG MINHO performed on Show Me The Money 4, and “GOOD BOY” of G-DRAGON and TAEYANG. They freely showed off their swag on the stage.

Then, it was KIM JINWOO’s turn. With his hair dyed red, KIM JINWOO sang G-DRAGON’s “CROOKED” using a standing mike and charmed the audience.

Then, the five WINNER members appeared on the stage dressed in Afro style and sang PSY’s “NAPA BAJI”. They were confident about their retro-style performance saying, “We asked the fans before the concert for ideas. We will put on a great stage that has perfect choreography and provide big fun.”

After their Seoul concert, WINNER will hold concerts in at the King Daejung Convention Center in Kwangju on March 26, at EXCO in Daegu on April 2, and at the KBS Hall in Busan on April 23.