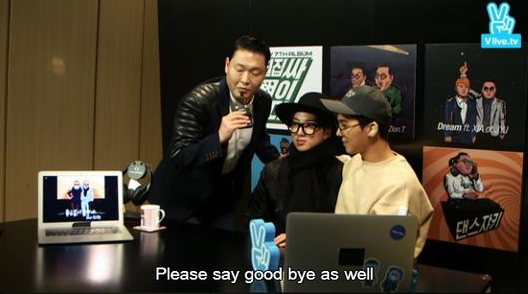 WINNER‘s Song Mino and Kang Seung Yoon give fans an update on their next album when they make a surprise appearance on “PSY Little Television”!

PSY has been hosting live shows called “PSY Little Television” on V app ahead of his comeback with his seventh album. During his show on November 28, he suddenly looks up and gestures for someone to come on camera, saying “There are so many people asking how you are!”

Song Mino and Kang Seung Yoon then come into the shot, and PSY gives them his chair, which they adorably have to share.

PSY asks them to tell the viewers how they’ve been, and Kang Seung Yoon says, “We’re working hard on our next album, and we’re recording every day in the studio. We finished up recording a song today and we thought we’d say hello on our way home.”

“We were watching downstairs,” says Song Mino, “and we decided we wanted to watch the show in real life.” Kang Seung Yoon adds, “We’ve been pressing the heart button.”

Later on, PSY asks the two WINNER members when we’ll be able to listen to a new song of theirs. “We’re working on our new album every day,” says Kang Seung Yoon, and PSY interrupts to confirm that they’ve really been working every single day. “We’re going to work hard to come out with a new album soon, before the weather gets warm,” says Kang Seung Yoon.