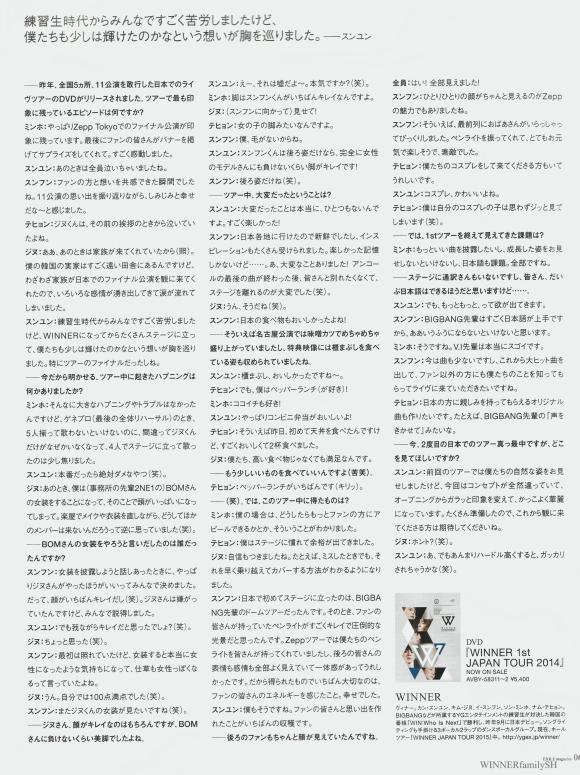 Q. Which member matured the most this past year?

LEE SEUNGHOON
—Mino
“I think Mino. I think he matured when he started appearing in ‘Show Me The Money 4’. At our dorm, my room and Mino’s room face each other so I know well. The Mino who appears on TV [for ‘Show Me The Money 4’] is very different from when he’s at the dorm that he seems like a totally different person. He has this great aura on TV. At our dorm, he seems like a comedian and he overflows with warmheartedness. (Laughs) But, in terms of singing ability or performing, I think Jinwoo also improved a lot. Both of them are amazing.

KIM JINWOO
—Himself
“(Thinking for awhile) Me… (Embarrassed laughter). Rather than saying I improved in one specific thing, I think I matured in a variety of things. Other than singing, I became slightly better in speaking Japanese compared to last year so I can sing in Japanese and talk in Japanese during concerts perfectly now. We made our fans wait for around one year since our last tour but I would be happy if they recognised that our performances improved for our current tour. And I guess my “beauty” improved compared to last year!? (Laughs)”

KANG SEUNGYOON
—Himself
“I think everyone matured. All of us have come to be more relaxed performing onstage, our skills in composing song have improved, and we are preparing for our next album as well. …But if I really had to choose, I would choose myself (laughs). Because I am the leader, I have more to do compared to my members, I need to be more responsible, I have more to worry about, and I need to be the arbitrator whenever opinions become divided. But because of this I think I matured the most. I still wish to show a more cool side to everyone as the leader too.”

NAM TAEHYUN
—Himself
“Myself (laughs). Since I experienced so many things, I think I matured a lot. Currently, I’m learning how to play the guitar. I’m not as good as a guitarist in a band but I’m trying my best. I’m also composing songs with this guitar. Regarding how I perform, I had a tendency to rush last year but I’ve learned how to be more composed and more relaxed and I don’t mess up my notes as often. (When asked the question, “How about your manly charms becoming more evident?” He answered) I don’t know myself but I always try to be as natural as possible (Laughs)”

SONG MINO
—Jinwoo
“Everyone matured but I think Jinwoo matured the most. He has always been cool but he has become cooler. Jinwoo’s eyes that are innocent and twinkle are so cool. He’s so cool that I habitually tell him, ‘Hyung, you’re so cool’ (laughs). He’s really good in performing in ways that make fans scream really loudly and he’s a hyung I really hanker for/love. Regarding how I matured, I think my musical range widened as I listened to a lot of music.”

Q. The DVD that documents your Japan tour last year which you traveled 5 cities and held 11 concerts for has been released. What was the event that was most memorable from that tour?

MINO: Naturally, our last concert at Zepp Tokyo was the most memorable. Our fans prepared a surprise event at the end of the concert for us. We were really touched.
SEUNGYOON: All of the members cried when that happened.
HOON: It was a moment when we could connect with our fans. Remembering the good memories of the 11 concerts make me really happy.
TAEHYUN: Jinwoo was crying from the beginning when we were greeting our fans.
JINWOO: Oh, that was because my family was in the audience (Embarrassed). My hometown is in a very far countryside but the fact that my family came all the way to Japan for our last concert made me feel so many things that I shed a few tears.

Q. Is there something that happened during that tour that you can share now that it’s over?

MINO: Nothing big happened, nor did any huge problems take place but during our last rehearsal, all five of us had to sing but Jinwoo made a mistake and he wasn’t there. The four of us were a little flustered as we sang without him.
SEUNGYOON: We would’ve been in big trouble if it had been a live broadcast (laughs).
JINWOO: My head was filled with worries about having to dress up as Bom-senpai (of 2NE1) that time. While that was happening, I was getting my make-up and outfit fixed in the waiting room and I was wondering, ‘Why aren’t my members coming?’ (Laughs)

Q. Who suggested that one of you would dress up as Bom?

HOON: When the topic of crossdressing came up, all of us thought it would be best if Jinwoo were to do it. Because he’s the prettiest (laughs). Jinwoo didn’t really like it but we all persuaded him.
SEUNGYOON: But you have to admit you thought you turned out pretty, right (laughs)?
JINWOO: A little (laughs)
HOON: He was shy in the beginning but he said that when he crossdresses he feels like he really is a woman and that his actions become feminine.
JINWOO: Yeah. I think I would give myself 100 points out of 100 (laughs).
HOON: I would like to see Jinwoo crossdress again (laughs).

Q: Jinwoo’s face is really pretty too but his legs are also as pretty as Bom.

SEUNGYOON: Eh~ That’s a lie. Are you being serious (laughs)?
MINO: When it comes to legs, Seunghoon’s are the best.
JINWOO: (To Hoon) Show us!
HOON: It’s because I don’t have much body hair.
SEUNGYOON: If you just look at Seunghoon from the back, his legs can perfectly rival those of female models!
HOON: Only if you look at me from the back (laughs)

Q. What did you find difficult during your tour?

SEUNGYOON: Honestly, there was nothing that we found difficult. It was really enjoyable!
HOON: It was refreshing to travel to different places in Japan and I was really inspired. I only have good memories… Oh, I remember I found something difficult! After our last song during the encore, our fans didn’t want to say goodbye so it was really difficult for me to step down the stage (laughs).
JINWOO: Yeah, that’s right (laughs)
SEUNGHOON: Japanese food is delicious too!

Q. Since you mentioned Japanese food, you talked about misokatsu (bean paste cutlet) a lot at the Nagoya concert but in the video that was shown during the concert, it showed you eating hitsumabushi (grilled eel on rice).

SEUNGYOON: Hitsumabushi is delicious
TAEHYUN: But I love Pepper Lunch! (“fast-steak” restaurant franchise)
MINO: I like Coco Ichibanya too! (Japanese curry house franchise)
SEUNGYOON: Above everything, bentos from convenience stores are the best!
TAEHYUN: That reminds me, I ate tempura for the first time yesterday and it was so good I had a second serving.
JINWOO: We eat well even if it’s not expensive.

Q. It’s alright for you to eat better food (laughs) (T/N: All the foods WINNER mentioned are pretty cheap and not very high-class foods)

Q. (Laughs) Then what did you gain through this tour?

MINO: For me, I think I found out how I can appeal to our fans more.
TAEHYUN: I’ve gotten more used to the stage so I’m more relaxed.
JINWOO: I’ve gained confidence. For example, even if I make a mistake, I think I’ve learned the method in overcoming that quickly and knowing how to cover it.
HOON: The first stage we stood in Japan was the stages of BIGBANG-senpais’ Dome Tour. The sight of fans holding lightsticks was really breathtaking and overwhelming for me. During our Zepp Tour, our fans held our WINNER lightsticks and I could see our fans’ facial expressions and emotions so clearly that I was so happy. So the more precious thing I gained was how I felt our fans’ energy. I was so happy at the time.
SEUNGYOON: It’s the same for me. The most abundant harvest is how we made memories with our fans.

Q. So you were able to see all the faces of your fans even in the back.

ALL: Yes! We saw everyone!
HOON: I think that being able to see every single person’s face is the charm of Zepp.
HOON: That reminds me, I was really surprised that there was a grandma in the very front row. It was really nice to see how she was vigorously shaking her lightstick and looking very healthy and how she seemed to be enjoying herself.
TAEHYUN: It was fun seeing people who cosplayed as us come too.
SEUNGYOON: Cosplaying is so cute.
TAEHYUN: Whenever I see people who cosplays as me, I stare at them without realising (laughs).

Q. What did you feel you had to improve after completing your first tour?

MINO: We want to present better songs, show our matured sides, and improve our Japanese. I guess we want to improve everything.

Q. You don’t have an interpreter onstage and I think you all speak Japanese very well…

SEUNGYOON: But we become greedy to become better and even better.
HOON: BIGBANG-senpais are really good at speaking Japanese so we think we need to be like that too.
MINO: That’s right. Seungri-senpai is amazing.
SEUNGHOON: As of now, we don’t have many songs. I want us to create a really successful song to make us known to people who are not fans and I hope for them to come to our concerts too.
TAEHYUN: I want us to make an original song that Japanese people can feel familiar with. Something like BIGBANG-senpais’ “Koe Wo Kikasete”.

Q. You guys are in the middle of your second Japan tour. What do you want fans to know?

SEUNGYOON: We showed our natural side during our last tour but this time, our concept has changed greatly that our feeling is totally different from the opening. We’ve become more cool and showy. We prepared a lot so we hope fans who we have yet to meet look forward to it.
JINWOO: Really? (Laughs)
SEUNGYOON: Oh, but would they end up getting disappointed if we have them look forward to it too much? (Laughs)