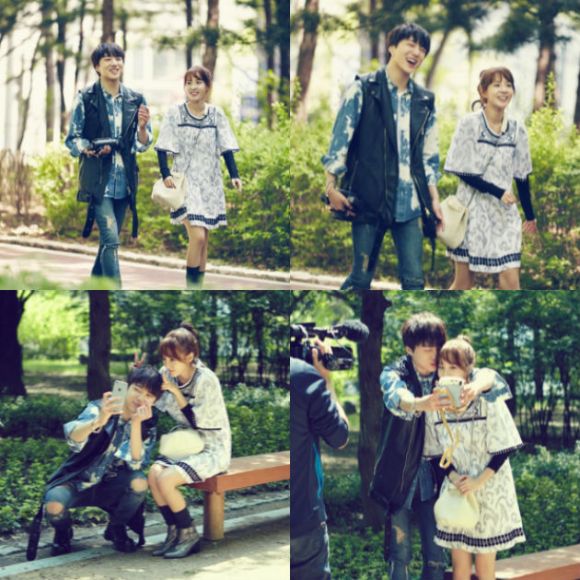 – Behind cuts of the couple’s sweet date unveiled!
– Music-romance web-drama “We Broke Up” aired for the first time today at 7pm

DARA and KANG SEUNG YOON unveiled photos of their date at a park, to draw big attention.

The photos are behind cuts taken at the shooting of music-romance web-drama “We Broke Up” (written by Jeon Seon-young, directed by Kim Ki-yoon, Kim Yong-wan) that will be broadcasted for the first time at 7pm today. They are showing DARA and KANG SEUNG YOON’s date at a park, drawing big attention.

The couple made a sweet and lovely scenes, putting their arm around each one’s shoulder. DARA is older than KANG SEUNG YOON in the drama as well, and they took special care is each other during shootings, according to insiders.

DARA who acts the character of “Noh Woori” who is a talented woman trying to get a job and KANG SEUNG YOON who acts as “Ji Won-young” who works hard for his music and band by even doing overnight part-time jobs are expected to captivate viewers by showing natural acting as a couple and a good chemistry between their perfect visuals.

Meanwhile, Music-romance web-drama “We Broke Up” that tells a story about a couple who live together even after they broke up will be unveiled episode by episode on NAVER TVCAST, YG Entertainment, YG Kplus YouTube channel, and Insight TV YouTube channel(http://youtube.com/insitetv) on every Monday, Wednesday, and Friday at 7pm, beginning from special consecutive broadcasting of episode 1 and 2 today at 7pm. From July 3, it will be also aired on OnStyle channel on every Friday at 7pm.