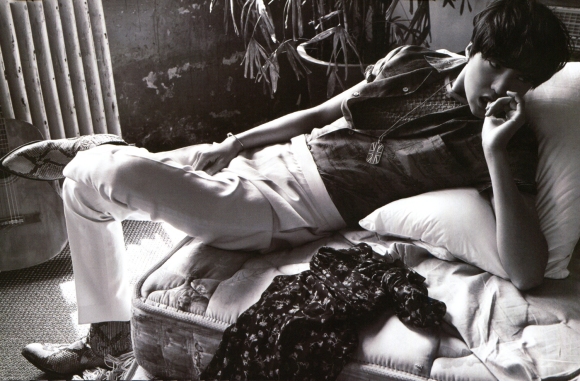 “Like I did last year, before <Elle> had their first meeting with Winner, I pulled an all nighter last night while putting last touches for the ‘We Broke Up’ OST. I feel like a very fortunate person to meet Elle as an actor instead of a musician. I also feel fortunate for receiving a leading role in the second production I’m taking part of after ‘High Kick! Revenge of the Short-Legged’. The ‘Ji Wonyoung’ that is portrayed in the script is a band leader who has a passionate stubbornness towards music. Right now I am forming the basis of why this character cannot let go of music. I felt similarities between Wonyoung and I whenever I got in contact with him as he marches forward in life no matter how difficult life gets with music alone. For me as well, as I started being on broadcasts, my financial situation improved gradually, however, when <Superstar K> Season 2 ended and during the trainee period I started right away, I suffered a great deal of mental devastation for a significant period of time. Anyways, since Wonyoung works hard to find his own way in life, I will do my best to immerse myself in his character to trigger empathy to the ‘880,000 Won Generation’ that is vigorously fighting against the world. It might be difficult for me to act because Sandara Park noona and I are really close but it is called ‘We Broke Up’. I don’t think we’ll have a ‘love scene’ that’s too extreme (Laughs).

Truthfully, the human Kang Seungyoon has many things he wants to do. Acting is another one of out of his numerous curiosities but the fact that a Kang Seungyoon of a new color appearing is its most attractive point. One day I wish to live as a doctor or producer, someone with a specialised occupation that my life that chose music cannot create. In a way, the method of music and acting is different but there is close correlation in regards to expressing emotions. I am often put in a position where I am listening to a story so I receive abundant sources of expression through these kinds of indirect experiences. This applies to me as the leader of Winner as well, I usually listen to whatever my members have to say. After we started as a group, I couldn’t think for myself so I was slightly stressed in the beginning. Of course my members take better care of me now. I am a very heavy and sincere person. I let loose at times but you could say I am the boring type. But when I accept something quickly or when I am being fearless, I think to myself that I must have ‘talent’. Compared to the past, the world has many opportunities now and it has become easier to choose but it is becoming difficult to stay and develop oneself in one domain. And since everyone is challenging themselves in a variety of things, the competition seems to be turning more intense. At times like this, I think it is right to protect the one burning and sleepless fire inside my heart but also to prune it to match the circumstances that appear passed the fences.”