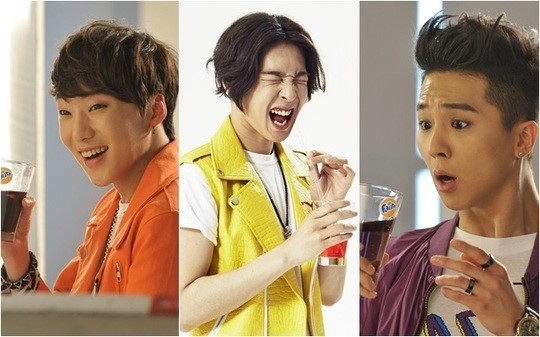 In the still images of Fanta CF shooting, which was recently disclosed by Coca-Cola, KANG SEUNG YOON, SONG MIN HO and NAM TAE HYUN—the members of WINNER—who are to debut soon, and the actress Nam Bo-ra show very realistic facial expressions. They were given a mission, in which they needed to compete with one another and act in their own styles to express the flavor of the drink.

One staffer from the shooting scene said, “All the members of WINNER have become good friends with each other after going through long training together, but they fiercely competed at their first CF shooting in order to be recognized as the best acting idol in the mission, which made all the staff at the scene laugh.”

KANG SEUNG YOON was adept at showing dynamic facial expressions in front of the camera, and he got an OK sign, calling the Fanta that he mixed himself ‘Bliss-out flavor’. SONG MIN HO expressed the flavor as ‘Eye-rolling flavor’, and NAM TAE HYUN as ‘Friday-night’s fever dance flavor’.

A staffer from Coca-Cola explained why they had chosen WINNER as their CF model saying, “Five members who have diverse talents in singing, rapping, dancing, and composing and different characteristics gathered and created a fantastic new idol group WINNER. So, their diversity is in line with this year’s Fanta campaign, which is ‘Create your own Fanta’ with various flavored Fanta”.

Meanwhile, WINNER appeared as guests of the concert opening for BIGBANG’s Japan’s 6 largest Dome Tour and gained their fan base in and out of Korea. Recently, their music video shooting schedule was uncovered, which hinted their comeback was nearing.