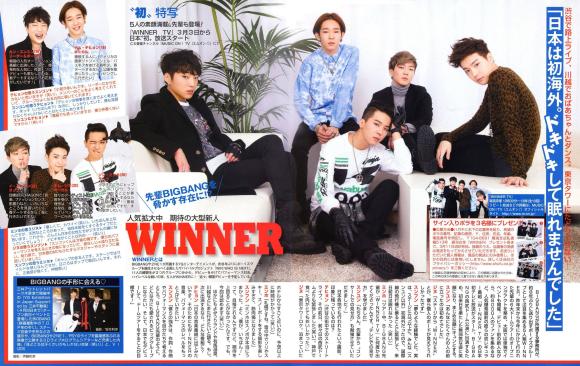 WINNER – The highly expected rookie-group who is expanding their popularity

Can they unsettle the existence of their senior, Big Bang?

Became tremendously popular after appearing on a famous Korean audition show. Last summer, he made his solo debut. If he went on a spring date, he would want to go see the cherry blossoms.

The youngest, who names American painter Jean-Michel Basquiat as someone he admires. If he went on a spring date, he would like to take a walk through the park or go shopping.

His wants to follow G-Dragon’s example in a lot of things, such as music, fashion sense, or influence. On a spring date, he would love to go to the sea.

An aspiring singer who has been influenced by several artists. Ideally, he would like shine like a diamond. For a spring date, he wants to go back to Tokyo Tower to ‘pay back his debt’ (laugh).

Ever since getting into hip hop as an elementary school student, his dream was to become a rapper. If he went on a spring date, he would want to go to Kawagoe. Since he’s been there for a TV filming, he would like to return to take a walk.

Winner members about each other

Taehyun about Seungyoon:
He tends to scold a lot. Since he’s the leader, I think it can’t be helped (laughs). He cares a lot about the other members, and he’s leading the group on the right track.

Seungyoon about Taehyun:
Taehyun tends to think deeply about things. Even though he’s the youngest, he is level-headed and possesses a lot of qualities that I would want to learn from him.

Seungyoon & Taehyun:
We keep saying it on TV programs, but we don’t hate each other (laughs).

Mino about Jinwoo
He’s nice and cute (laughs). He’s the eldest, but I think he’s the type who naturally arouses maternal instincts. From now on, the Japanese girls will rapidly become crazy about Jinwoo, right? Except for his loud snoring…. (laughs)

Jinwoo about Seunghoon
Seunghoon is the very embodiment of genius. He is at the core when we come up with our performances and without him, we wouldn’t stand. He’s a hard worker who not only devotes himself to his Japanese MC skills but also checks upon the manager and the staff.

Seunghoon about Mino
He is someone with a gap [in his personality]. On stage, he comes across as wild, but in daily life, he is easy-going and funny. Moreover, he has a strong sense of justice and cares about his friends.

Street performance in Shibuya, dancing with elders in Kawagoe. Couldn’t get to Tokyo tower…

“Japan is our first place to visit overseas. I couldn’t sleep from the excitement”

BIGBANG’s agency which hasn’t produced any boy group in 8 years, will now debut “WINNER”, a rookie group who is currently getting a lot of attention. From last year till this year, they were the opening act of their senior’s 6 dome tour and also had their own event in Osaka. The beginners who haven’t debuted yet attracted about 8000 fans.

Their popularity is just before boiling, their first regular TV program “WINNER TV” is going to be broadcasted in Japan. They came to Japan for BIGBANG’s Seibu dome tour. During their first arrival in Japan, their innocent appearance made us smile. Their serious face fluttered us.

Seungyoon : It was my first time standing in front of so many people.

Jinwoo : I was so happy to see fans holding boards with our names and ‘WINNER’ on them

Seunghoon : It was like a dream experience. Actually before the stage, it was our first time(except for Kang SeungYoon) going overseas. So I was nervous about getting on an international flight. I couldn’t sleep the night before.(laughs)

Mino: While on tour, our senior BIGBANG came on “WINNER TV” several times. We learnt how to behave in TV.

–Interviewer : You visited many regions in Japan. Which place is most memorable?

Taehyun: Street live in Shibuya. I was more nervous than in Seibu Nagoya dome(laughs). The meat which I ate in Koube was so delicious❤

Jinwoo: Tokyo Tower. It was so close to our hotel but I took time to go there, more than I expected.(laughs)

Mino: Sapporo. I enjoyed sled, skiing and snow boarding too much so I got muscular pain

Seunghoon: Mino was really good at snow boarding. Usually he bluffs saying “I’m the best” but he never surpassed my expectations. I agreed only this time(laugh)

–Interviewer : If u get a chance to be on TV next time, what kind of TV program you want to be?

Taehyun: I want to be on Japanese music show. We have to improve our performance for that though

Seungyoon: Our strength is that we can compose, produce music and think out performance by ourselves. We want to become a big artist who’s loved by everyone like our senior BIGBANG. Our objective is to debut in Japan and do a dome tour!