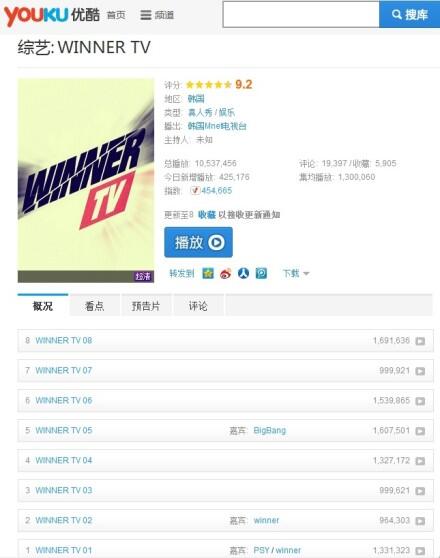 Group WINNER has been receiving much attention in China since before their debut.

Previously on there survival audition program, “WIN: Who is Next,” they received 1 million views or more for each episode, showing their popularity.

“WINNER TV,” which began last December, has also been receiving around a million views each episode. On the 8th episode, in which the members of WINNER did a parody of the famous recent drama, “the Heirs,” a record of 1.5 million viewers logged in to watch this episode. Seungri of Big Bang also appeared in this episode, showing a comic side of himself as he played the role of the CEO of YG Entertainment, Yang Hyun Seok.

This show has currently released 8 episodes and showcases the groups preparations for their album as well as a look into their daily lives. WINNER has not officially debuted yet, but it is garnering a great amount of interest from both China and Korea.

On the other hand, they have 2 episodes left until the show ends. This show airs every Friday through Mnet, and in every episode, the show shows all about WINNER as the five members joke around in their daily lives and prepare for their official debut. The viewers can also watch this show on Naver TV Cast, YG’s official blog and its official YouTube channel.

WINNER also released pictures of its studio recording sessions, hinting at the fact that the D-Day for its official debut is very near. Many are anticipating this group to be the next biggest boy-idol group from YG.

Shinhwa’s Lee Min Woo also mentioned WINNER as an idol group he was interested in in a recent interview, and said that he watches WINNER TV often.