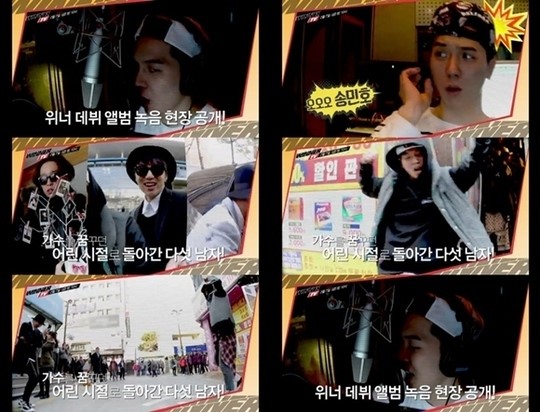 In the preview of episode 9 of cable channel Mnet’s “WINNER TV” show, which was released on YG’s official blog and search engine NAVER’s TV CAST on the 4 this month, WINNER’s rapper SONG MINHO is recording a song in a booth of a recording studio. The scene is heightening fans’ expectations.

SONG MINHO is catching fans’ eyes with his new appeal, which is totally different from somewhat sloppy character that has been shown in “WINNER TV” so far. SONG MINHO is presenting himself as a perfect rapper with keen eyes, under significant subtitles that go “Recording of WINNER’s Debut Album!”.

WINNER of five members (KANG SEUNGYOON, NAM TAEHYUN, SONG MINHO, LEE SEUNGHOON, and KIM JINWOO) has been come under spotlight of multiple media outlets, being called “the most promising new boy group of 2014”. Plus, even though they have yet to make an official debut, major sports dailies of Japan have made headlines about the “birth of WINNER”, proving their already-big presence in the Japanese entertainment world. WINNER is now accelerating preparations for their debut album, announcing their attack on the K-Pop world in earnest as YG’s next-generation boy group.

Five members of WINNER have long dreamed of becoming a singer from their childhood days. In episode 9, the members visit their hometowns to spend a pleasant time with their family members.

Leader KANG SEUNGYOON and rapper LEE SEUNGHOON’s hometown is Busan and they visit Haeundae Beach in the new episode. KANG passionately sings “The Reason” of Hoobasbank and Lee boasts his flagship dance. Then, Lee gives a special spectacle, by dancing the powerful choreography of YG singer TAEYANG’s “RINGA LINGA” in front of many people in downtown Busan.

NAM TAEHYUN, the youngest member of WINNER, shows a charm like a mischievous boy, throwing pebbles into a stream and playing with ice. Somebody beside him is saying, “That is exactly what you did when you were a boy”, making viewers laugh.

Meanwhile, “WINNER TV” comes to an end on the 14 this month, after airing episode 10.