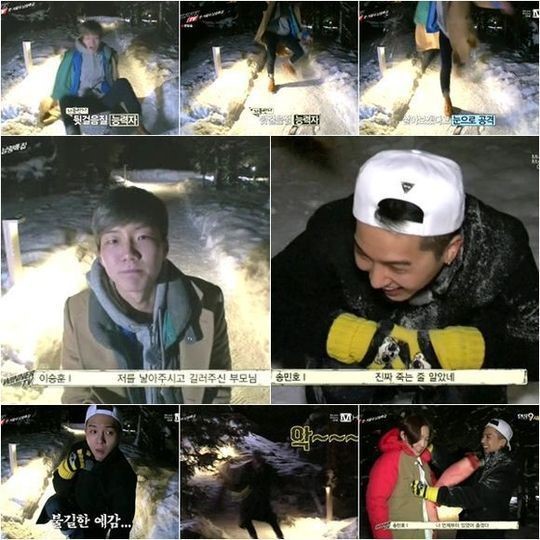 [OSEN=Lim Seung Mi] Group WINNER has captured the watchers with their appeals that swing between clumsiness and sincerity.

In the 7th episode of Mnet ‘WINNER TV’ that was broadcasted on the 24th, WINNER has filled the show with ‘The 1st WINNER Winder Sports League’ and a scary new year’s interview, and dance cover of 2NE1’s ‘Missing You’.

‘The 1st WINNER Winter Sports League’ included three events, race in the snow, sled race and snow wrestle. The members’ energetic and competitive look was enough to forget about the coldness of winter. The ‘New Year’s interview’ that followed the league was set up to scare the members. The appearance of all grown boys full of fears presented the viewers with big laughter.

Unexpected sides of the members of WINNER were also captured throughout the programs. The most innocent-looking, Kim Jin Woo won the 1st place in the sports league with a foul move and the most masculine, Song Min Ho, could not win a single medal.

During the ‘frightening’ interview, in contrast to Kang Seungyoon who reacted calmly, Lee Seunghoon got horribly terrified and made the viewers laugh. After the interview, the youngest, Nam Tae Hyun appealed the viewer with his cuteness when he held one of the staff members and asked to go with him.

After providing entertainment for the watchers with their sloppy and clumsy charms and a comic dance, WINNER performed their senior group, 2NE1’s renowned song, ‘Missing You’, in their own style and illustrated their solemn looks.

WINNER’s version of ‘Missing You’ that starts with Song Min Ho’s rap, gave off a different mood from the original song with the harmony of thick voice of Kang Seungyoon with his guitar, distinctive voices of Nam Tae Hyun and Kim Jin Woo, and Lee Seunghoon’s rap.

In the preview of next episode, WINNER aroused the public’s expectation by showing a clip of the group parodying the SBS drama, ‘Inheritors’.

‘WINNER TV’ is broadcasted every Friday at 10 PM.