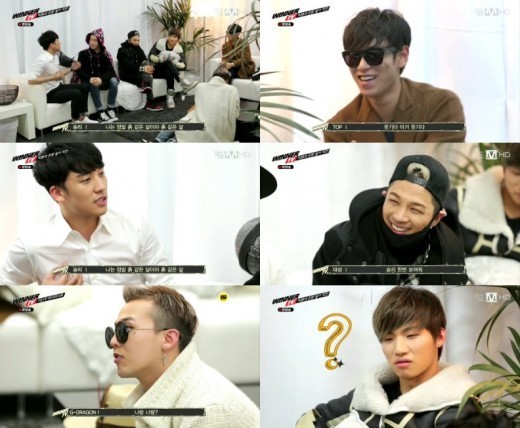 YG Entertainment’s most experienced boy group and the newbie group met. They were like brothers. The two groups have their similarities and differences.

WINNER TV, aired on Jan 17 through Mnet, featured WINNER visiting BIGBANG. In the previous episode, WINNER members went to see a fortuneteller in celebration of the new year. And after hearing the good compatibility with BIGBANG, they decided to bond.

The oldest of WINNER, KIM JINWOO, shyly approached G-DRAGON and said, “The fortuneteller said we compliment each other. So I came here to bond.” To this, GD joked, “Then should we date?” KANG SEUNGYOON, who apparently is inseparable to TAEYANG according to the fortuneteller, showcased TAEYANG’s solo song ‘Ringa Linga’ with the help of LEE SEUNGHOON and SONG MINHO. TAEYANG was surely satisfied. 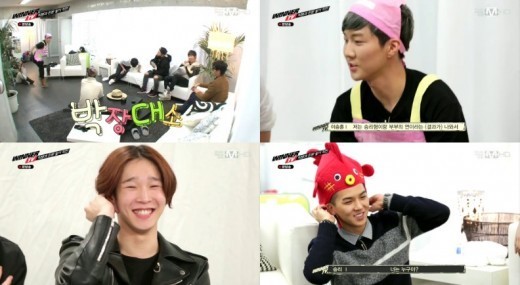 LEE SEUNGHOON was told he is a marital partner of SEUNGRI, so he put on an apron and pretended to be his wife. He performed SEUNGRI’s ‘Gotta Talk to You’ in a comical way. He even packed a handmade lunch for SEUNGRI.
NAM TAEHYUN was LEE SEUNGHOON’s rival. The diviner told NAM TAEHYUN, “You should set T.O.P as your role model and your compatibility with SEUNGRI.” NAM TAEHYUN apologized to SEUNGRI, who was expected to be picked, and said, “I pick T.O.P.” The awkwardness made people laugh. BIGBANG members told NAM, “You will have a hard time becoming close to T.O.P.” 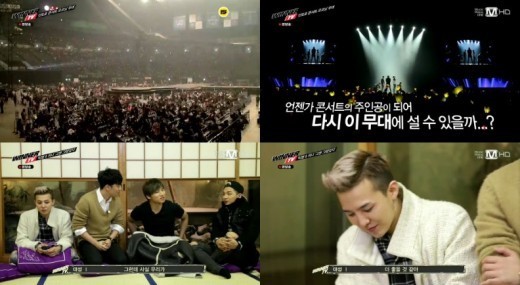 And then came SONG MINHO. The diviner told him, “You must stay away from YANG HYUN SUK and DAESUNG. Your compatibility with DARA is good.” SONG commented, “I’m told to stay away from DAESUNG but I want to get to know him better.” When BIGBANG told him to say something bad to DAESUNG, he said, “No thanks, DAESUNG,” to which DAESUNG joked, “Get out of here!” SEUNGRI told WINNER, “2014 has dawned upon us. Let’s run forward. We should seize victory. Break a bone!”

The episode also showed WINNER at BIGBANG’s Japan Dome Tour. They delivered dynamic performance to the Japanese fans. BIGBANG certainly set a good example. After the concert, they came together to discuss how to be good entertainers, while also recollecting memories from the past. DAESUNG said, “We are not the ones to give advice. So why don’t we have a heart-to-heart instead.”

BIGBANG and WINNER bonded more when they impersonated their boss, YANG HYUN SUK. Every WINNER member gave an attempt, but no one could beat SEUNGRI. He commented, “YANG has to look like he can do everything. And he has to be barefoot,” leaning his body back. BIGBANG and WINNER burst out laughing. 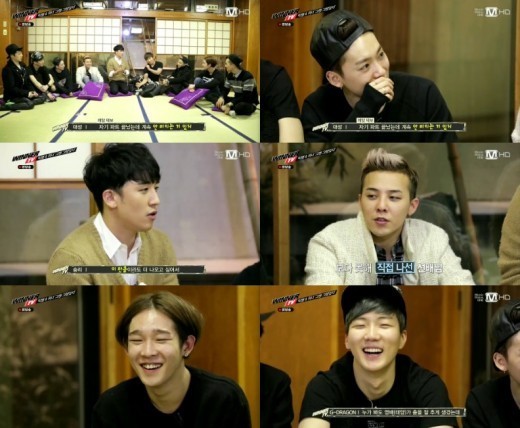 After the ‘lesson,’ TAEYANG said, “We tried with Se7en’s dance first. It was so hard, but as time passed, it became a knowhow for us. We don’t have to think too much before moving our bodies.” SEUNGRI added, “I did a lot of weird things at the beginning. I wanted to be on TV more that I didn’t go away after my part was done. It took me five years to actually let things go.”

BIGBANG and WINNER have their similarities and differences. BIGBANG was formed on a survival audition program in 2006, and made a debut. And their popularity became absolutely borderless. They also achieved great success as solos. In 2013, WINNER was formed the same way BIGBANG did. BIGBANG is their role model. And they certainly have things in common with BIGBANG. Could they become as good as their role model? All eyes are on them to see if they can.