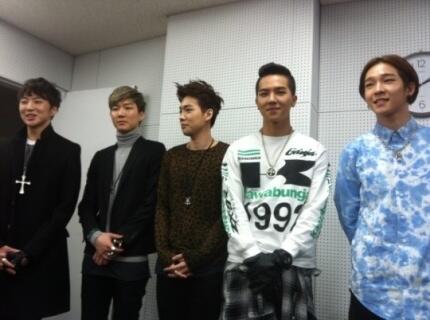 YG Entertainment’s (YG) super rookie WINNER disclosed some of their self-composed songs for their debut album through ‘WINNER TV’.

In total, 5 self-composed songs were disclosed through the episode. Some parts of Kang Seung Yoon’s song, ‘SHUT UP’ with the lyrics written by G-dragon and Song Minho, ‘BAD HERO’ composed and written by Kang Seungyoon, Song Minho and Lee Seunghoon, Song Minho’s self-composed song, ‘MAD MAN’ and Nam Taehyun’s self composed songs ‘고백하는거야’ and ‘이밤(Tonight)’ were disclosed. The self-disclosing part recorded the highest viewer rating, showing the fans’ great expectation. The evaluation on the songs from Yang Hyun Seok was bitter. “YG has about 10 producers, if they write songs like these to create an album, then it would take only a week to create one. Everyone can compose. The thing is how good it is,” said Yang Hyunseok to Kang Seung Yoon’s song. CEO Yang also showed his inconvenience about Song Minho’s song and advised him to make a song that he is the best at. Nam Taehyun’s solo songs got relatively positive comments. CEO Yang liked the melody of ‘고백하는거야’, and said “If you arrange it a little bit more, this could be your solo song”. He said, “The lyrics are not special. You should use your own lyrics to express,” about the song ‘이밤(Tonight)’.

CEO Yang also showed his anxiety about WINNER’s debut coming soon. “You cannot go out with the songs like the ones in ‘WIN’. It will be a big trouble. You should make songs that make people say ‘Indeed it is YG, WINNER’. Think different. It should be more tiring, hard and scary than in ‘WIN’” said Yang Hyun Seok.