WINNER’s Kang Seungyoon showed us a dance and a fashion show while half-naked and under the moonlight, showing his funny off-stage charms.

On the 27th Mnet broadcast of WINNER TV, Kang Seungyoon brought great laughs to Nam Taehyun and the show’s staff when began to take off his clothes in his hotel room, not knowing that there were cameras in his room recording live. 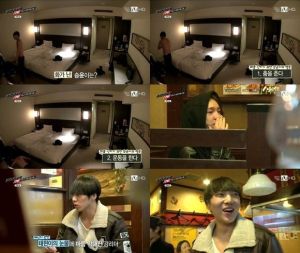 When Kang Seungyoon suddenly put his clothes on and walked out of the room, Nam Taehyun said [to the show’s staff], “Those are the clothes that he has to wear for tomorrow”, Kang Seungyoon struck a model’s pose in front of the mirror, passionately showing himself off, almost as if he was drunk. The scene made the audience have a good laughter.

If you saw his his dorky ways when he took off his top and began to dance, you would surely emit a sigh of affection and adoration for him.