[Top Left] WINNER: YG Entertainment
With the program WIN: WHO IS NEXT and the 11 trainees are separated into two teams to battle, under the confirmation of Big Bang and 2NE1, Mnet commenced a live broadcast of the final battle. In the end, Team A with its five members acquired the victory, gaining the name of WINNER. WINNER’s Hello WINNER fanmeeting in Japan had over 8,000 fans attending.

[Top Right] With superstars such as Big Bang and 2NE1 under its roster, [YG] has finally pushed out a survival show WIN: WHO IS NEXT for their new boy group after seven years. The five people who came from the program broadcasted in Korea, even before their debut they have embarked on Big Bang’s six Dome Tour concerts as the opening act. Their solo event attracted over 8,000 fans, making them a super rookie with superior abilities.

“Nice to meet you”

Q: How about the first stage as WINNER in Seibu Dome yesterday, how was the first day in one of  Japan’s 6 largest dome tour for senior BIGBANG?

Seungyoon: “At the moment, I was getting all choked up because it was the first time to stand in front of such a many people.”
Mino:  ”I was so excited and my heart was about to burst. It seemed I am the most enjoyed person among the members.”
Jinwoo: “I felt strange when I saw some VIPs holding our name board, but ofcourse, it made me happy.”
Taehyun: “I felt our (first) performance is NOT really satisfactory since we’ve seen our senior’s (BIGBANG) stage. This time, we’re able to go with all the Dome tour schedules, so I want to show growth of us at the final concert in Kyocera Dome. And I’m sure that we can do it.”

Q: I heard everyone, except Kang Seungyoon, this is the first time to come Japan. So could you tell me Japanese words you’ve learned lately?

Mino: “Hajimemashite～(Nice to meet you!) First meeting is important, right? A greeting is important.”
Hoon: “Ganbarimasu!(I’ll do my best!) I think this is the ONLY word to get a lot of support from now (laughs)”

Q: What do you want to do in Japan?

Seungyoon: “I wanna go Harajuku. We like looking for clothes.”
Taehyun: “I wanna go FujiQ Hiland (amusement park) and ride a roller coaster!”

Q: FujiQ is the famous for Korean artists,and also it has a scary haunted house.

Mino: “I wanna go haunted house too! (all members agree except Taehyun)”
Taehyun: “I don’t like haunted house(with sad face)”

Q:What are your goals?

Seungyoon: “We want to have fans all over the world and love like BIGBANG.”
Mino: “We are immature now, but our strength is we can make songs and dance ourselves, also we can organize our stage. We will stay keeping our colors and try to make good songs.”

I think it was when I was in sixth grade back in elementary. By chance, I saw a fan crying shown through the video screen at a Korean singer’s concert. I thought that clip was so wonderful that I got goosebumps and that’s when I thought I wanted to become a singer as well. The me who is always straightforward, nags at the members a lot. I’m a nagging leader. (Laughs)

I’m the type to say my feelings first to the girl I like. I can confidently say that you don’t have to worry about me cheating. And, I’m also the type that is able to give songs as gifts for my girlfriend.

Although I have things to reflect upon from the Seibu Dome’s first stage like my singing or my MC talk, I have no regrets. Seungri sunbae gave us advice about our Japanese greetings!

About dating, I think the other person is very important. Since I’m the type that likes to deal with things upfront, I don’t think we’ll have a lot of fights. I think I’ll be able to love only my girlfriend endlessly.

After finishing the Seibu stage, we went to greet the Big Bang seniors… We said, “We’ll make it even more perfect tomorrow!” GD senior then said to us, “Work hard tomorrow too~!”

I don’t remember exactly when it started. I think there were these moments that suddenly made me remember how much I wanted to express through music. Artists that I like include the artist, Jean-Michel Basquiat. Although he’s not a singer, I admire his views.

The most difficult and also the happiest moment of my life was when the results were announced on WIN: Who is Next.

With the influence of my noona who was a fan of idol groups, I first danced on stage back in Grade 5. I couldn’t forget the loud cheers back then that I wanted to stand on stage once again. My goal was GD sunbae! Personally, since I liked his clothes, He was a very influential senior that I wanted to emulate whether it be in fashion or music.

If you were to describe my personality in one word: The character from Slam Dunk, Kang Baek Ho. I work hard every single day while thinking of myself as a genius. (Laughs) For example, if, the person I liked was Japanese, I would study really hard so I can talk to her! Also I would enter her as my #1 speed dial on my cell phone!

Since Grade 4, I fell for hip-hop. So I started to listen to overseas music and of course, Korean music. I think I’m the mood maker in our group.

If I find someone I like, I’m confident that I’ll be able to make her laugh endlessly! Up until now, I’ve always been the one confessing so if there’s a chance, I want to receive a confession!

The day before the Seibu stage I slept with a fluttering heart imagining the scene right in front of our eyes. I was so happy when I saw some fans carrying placards with our individual names or our group’s name. So I thought, “There’s people who are interested in us too~” 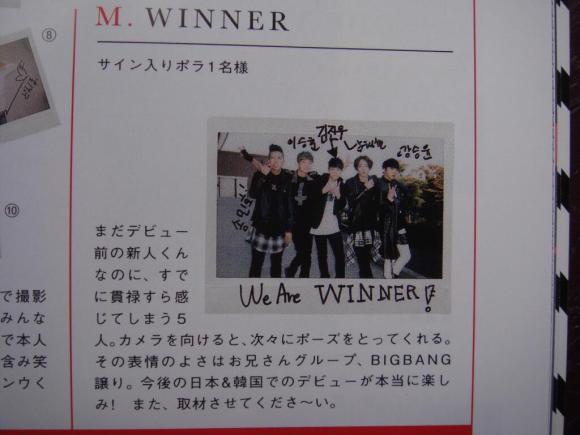 Even though before their debut, we can feel the dignity of WINNER members. They made various poses in front of cameras. Their great expressions would be given from WNNER‘s old brother, BIGBANG. We cannot wait for their debut in Japan and Korea! Please let us have an interview again soon!