The ones who became WINNER through [WHO IS NEXT: WIN] that began since August, another story [WINNER TV] is now revealed. It began in the middle of the summer and passed through autumn and winter and the season changed for two times. And while the season was changing twice, I believe we altogether obviously felt from WINNER that the most powerful, stinging and realistic seasons have passed out of all the seasons that have gone by.

After watching [WINNER TV] for the first time, my views thinking that I got more relaxed after becoming WINNER from WIN changed into a trite conclusion when the final episode of the show is coming near and that is when I realized that I have not yet achieved my dreams but everything is just about to start, which made me thrilled. The road I have walked as a trainee all this time as if balancing myself while walking on a thin rope was just the path to become much more solid just for ‘WINNER’. Starting from WIN, which is the opening the door of ‘debut’, now we begin a 10-week long journey to be WINNER from WIN to try on another new challenge and head toward the dreams of their own.

While [WINNER TV] is on air, the best scenes can be viewed each week through NAVER STARCAST.

With the interview that signals the beginning of [WINNER TV], many staff members and also with Yang Hyun Seok, the representative producer of YG, showing up on the site made WINNER naturally nervous. However, the world star Psy welcomed them by giving advice that is full of sense and wit. With WINNER’s first stage being decided as BIGBANG’s Japan 6th Dome Tour, the process of preparing for the first successful stage is revealed. Starting from the excited minds of packing their stuff and the excitement from preparing new songs in Japanese did not last long. When they saw the enormous size of the stage in the dome, the scale of the concert and experienced the world of professionals, WINNER was taken aback! The real personality and sides of each WINNER will be revealed in live among all the moments filled with nervousness. Now let’s start looking at the first episode of [WINNER TV].

#1. All the stories that begin with WINNER being the ‘First’.

All the people met through [WINNER TV] are forced to absorb information about the personality of WINNER, the process of producing the album and also their daily lives. There is also the unexpected appearance of the world star Psy! Psy, who allowed him to be interviewed to celebrate WINNER’s win. He provides nice and neat explanations! They “‘WIN’ from ‘WIN’ and became WINNER and it is WINNER’s WINNER TV.”

#2. The first step to going abroad for their first planned activity. Showing their passport pictures!/strong>

Was it really taken during the senior year of high school? A soccer player? A girl high school student? Missing the part under the nose? Kang Joon Pyo? It is relatively possible that one out of these five will have normal pictures but ‘not that normal’ passport pictures are revealed. A minute and 55 seconds long embarrassing moments that even WINNERS could not avoid is shown. Erasing from the memory their own pictures that just were just shown not long ago and also the unique laughter of WINNER laughing when looking at the pictures of each other!

#3. Why is that? Why is it not familiar? The unfamiliar first night in Japan.

All the unfamiliar scenes from the rapper singing a song that is incomprehensible, someone saying I am working on a song because I can’t sleep in a cool manner but then falls down because of a chair, speaking Japanese while putting on the face pack and to a person with a deer face snoring. Even to WINNER, it could be said that they are little bit unfamiliar with each other but the first night in Japan is not that bad. 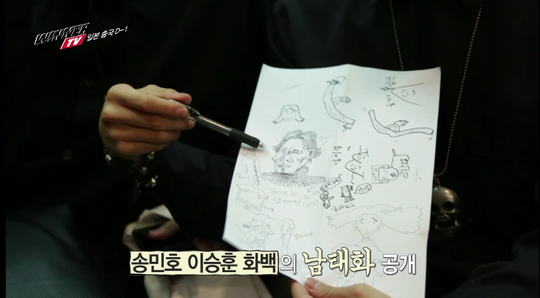 The ‘Nam Tae Hwa’ masterpiece that the rapper line drew. The highlight of the drawing is the eyebrows and 5:5 separation of the hair!

YIhee, WINNER’s new family and the only one who is a girl in WINNER residence’ Yihee~ Wow

Everyone was surprised when they heard that Seungyoon changes ‘this item’ once in two days but Jin Woo alone has the expression as if saying ‘What? Did you not know about it?

I can’t believe our official first stage will be in Seibu Dome, which is incredibly big. 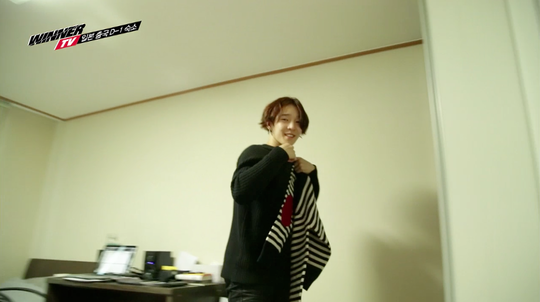 The part where what will happen ‘5 seconds after’ is curious

This telepathy works well but it looks like it goes the other way.

Their real daily lives that are mysterious as it looks clumsy at some point rather than being perfect and WINNER who are nervous as they heard the expression that this valuable experience cannot be experienced even with money makes them a little bit nervous!

No need to say liking the fancy looks on the stage but WINNER TV is filled with somewhat suspicious viewers who like even the swollen faces in the early morning. Every Fridays on 10pm!! Make sure to watch the show on time!! 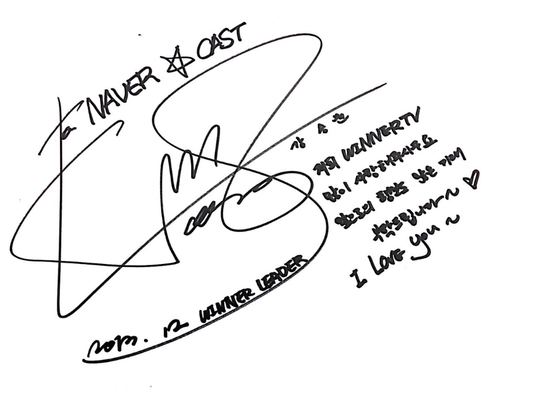 For the viewers of [WINNER TV],which is released only on NAVER STARCAST, we present you guys with the autograph from WINNER! The first autograph is from Kang Seungyoon, the leader of WINNER! Whose autograph will it be next time? Please look forward to next week!