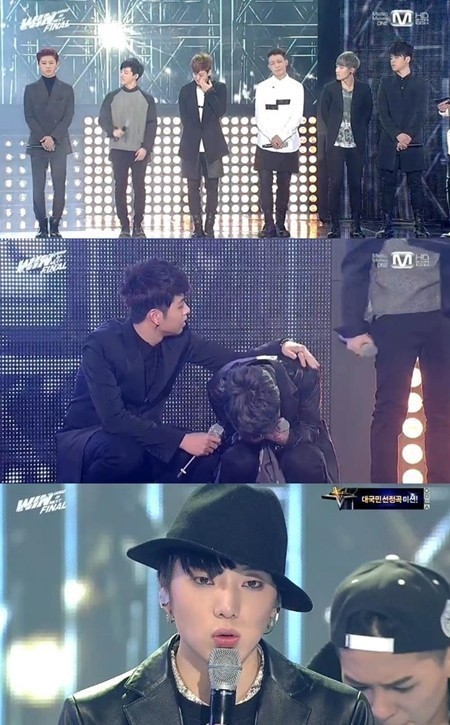 Four songs written by Team A and B for the final battle of “WHO IS NEXT:WIN” (“WIN”), YG Entertainment (“YG”)’s project for debut of its new boy band “WINNER”, have been ranked top in real time charts of five music streaming web-sites.

WIN’s digital single “FINAL BATTLE”, which was released at noon on the 28, has four tracks, including its double title “GO UP” of Team A and “CLIMAX” of Team B, as well as two different versions of “JUST ANOTHER BOY”, which was the song for “same track different song” mission given by YG producer Teddy.

Team A’s “GO UP” is ranked top on Cyworld’s real-time chart as of 2pm, and Team B’s “CLIMAX” is ranked in the third place, showing a strong momentum. In addition, all the four songs are ranked in top 10 on Mnet, Olleh, Bugs, and Soribada, drawing much attention.

The release of the four songs is a surprise gift for WIN fans, who have spared no support and affection for WIN members, even though they have yet to make their debut. Fans have been expressing high expectations even before the release. Team A’s “GO UP” topped the search word list on search engine DAUM as soon as it was released, proving such popularity.

Even though the songs are written by trainees before their debut, fans are giving fervent support for them, saying “I really love this song. I can feel their sincerity.”, “I want to listen to Team A’s other songs. I hope they will debut soon”, etc.

Meanwhile, Team A, selected as YG’s new boy band “WINNER” has begun preparations for debut. They will debut both in Korea and Japan at the same time.