As “WHO IS NEXT : WIN” (“WIN”), a survival show that depicts the process of selecting YG Entertainment’s new boy band members, is expecting the final battle on the 25, fans are paying keen attention to whether the losing team will be disbanded as originally planned.

So far, YG has proclaimed that the losing team will be dismantled no matter what, and this has heightened the tension of the survival to the peak. In a telephone interview with OSEN early this month, YG’s head Yang Hyun Suk said “Since we have left the evaluation for selection of the winner 100% to the viewers’ vote, what is the most important is to accept their decision no matter what and to keep out promise.” 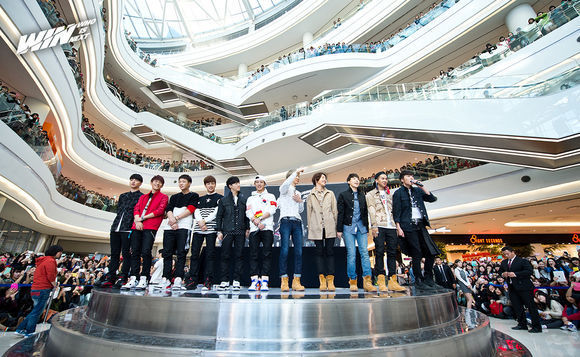 Before that, at the production presentation of “WIN” show, Yang Hyun Suk said that the winner will make debut as a boy band immediately and the losing team will be disbanded or their debut will be put off.

Furthermore, he also said “I think that when the final winning team is determined, it is right to disband the losing team no matter what.” According to YG, Yang has never changed his mind until the 24 this month, just a day before the final battle.

However, now, both Team A (Gang Seung Yoon, Lee Seung Hoon, Song Min Ho, Kim Jin Woo, and Nam Tae Hyun) and Team B (B.I, Goo Jun Hwe, Kim Jin Hwan, Bobby, Song Yoon Hyung, and Kim Dong Hyuk) have formed their own fan bases, with full talent and good look. Their fans have opened a web-site, to request a different way to YG, to make all the 11 members make debut at the same time or to give the losing team another opportunity for debut. As “WIN” is drawing much popularity not only in Korea but also in Asian countries mainly in China, foreign fans have been holding signature campaigns for that plan, too.

Meanwhile, about 3,000 fans gathered to High-Touch meeting which was held in the afternoon of the 12 at Time Square located in Yeongdeungpo, Seoul, showing “WIN”’s high popularity. This is an unusual degree of attention to singer trainees, who have not even made their debut yet.

In other words, since “WIN” is a show to select a boy band for which popularity is the most important factor, it seems that YG cannot just ignore such response of fans.

“WIN” is a real survival show where 11 trainees who have been trained through YG’s training system for up to three years fiercely compete against each other in Team A and B. The two teams will have the final battle on the live-broadcast stage on the 25, and the winning team will debut as “WINNER”, YG’s new boy band to be formed for the first time in eight years since Big Bang’s debut.

The final battle will test the members by giving them three missions. The first one is competition with songs written by the members of each team themselves, the second one with dance, and the third one with arrangement of the same track. The third mission is especially drawing a lot of attention, as it is thought to the toughest one where Team A and B’s members have to write the melody and lyrics by themselves, for a track given by YG’s head producer Teddy.