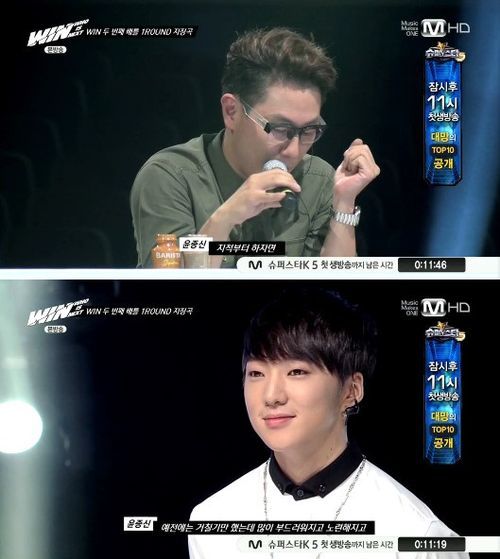 Team A on YG Entertainment’s ‘WHO IS NEXT: WIN’, a survival program that will determine the formation of the next boy group, temporarily changed its leader from Song Min Ho to Kang Seung Yoon, due to the injuries of Song. The team wisely faced the crisis and boasted a fantastic harmony among the team members.

On episode 7 of ‘WIN’ aired on Oct 4, YG’s founder Yang Hyun Suk expressed much concern for Team A for the leader, Song Min Ho’s injury could put them in a disadvantageous position. At last, Yang decided to change the leader temporarily to Kang Seung Yoon.

Yang, saddened by his injury, commented, “The mainstay of the Team has a leg injury, so let’s change the leader as a quick fix.” He then picked Kang Seung Yoon. Song Min Ho, ached the viewers when he said in an interview, “I feel like I’m falling apart.”

Kang Seung Yoon commented, “I felt really bad for Min Ho. But before I comforted him, I thought the first thing I needed to do is to lay out the direction for the Team.” His comment showed his enthusiasm and passion for winning the battle.

The team stayed up all night preparing for the second battle. The temporary leader, Kang Seung Yoon, worked relentlessly on remaking the song ‘Officially Missing You’ until his fingertips were bruised. He stayed awake while his members were asleep.

Kang Seung Yoon suggested that the original love song should be re-written as a reference to nostalgia for themselves in the past, and the remaining five members divided the songs into parts and wrote their own stories.

Song Min Ho supported Kang Seung Yoon by saying, “I believe in you. I will follow your suggestions.” Kang Seung Yoon also contributed in creating a solid and tight teamwork among the members by being a determinative leader.

Despite the crisis brought on to the team by Song Min Ho’s injury, the team showed great amount of consideration for each other and weathered the difficulties together. And such effort was clearly visible in their performance.

Kang Seung Yoon showcased an unswerving singing skill as the main vocalist while Song Min Ho made confident eye contacts with the camera. His remarkably unique rapping skills won a high praise from Park Jin Young, one of the judges, “The best rapper among all the contestants.”

In the background, members’ photographs of their childhood were shown as a slideshow, making the viewers soak in nostalgia. The team created a mesmerizing harmony with their rap and singing, telling their genuine stories of their lives.

B.I., the leader of Team B, who is known for pursuing perfection, seemed to look a little nervous by Team A’s perfect performance.

The result of the second battle of ‘WIN’, the program that is firing up different websites, will be revealed at 10p.m on Mnet and 11:20p.m on tvN on Oct 11. Viewers can enjoy replay and behind-the-scene services on Daum Mobile App, while also watching the live streaming of the show.

It is also drawing huge attention from abroad and has been airing in 10 different Asian countries from Sept 17, including on STAR TV-related channel V and East Asia’s CJ E&M channel M. Youku, the largest video-sharing website in China streams the show exclusively. Episodes 1, 4 and 5 raked in 1 million viewers already, proving its extreme popularity.

From last week, it has been airing in 188 countries through Arirang TV to reach more international fans.