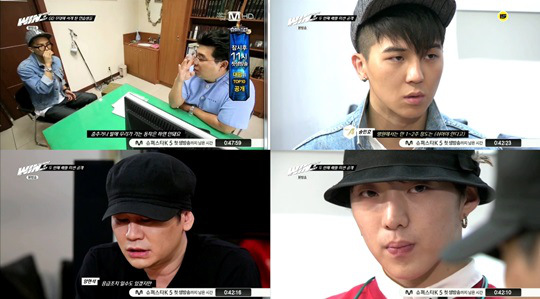 On the October 4th episode WIN: Who Is Next, YG Entertainment switched out the team leader for Team A.

In the 7th broadcasted episode ,Team A’s leader Song Minho, due to a leg injury, went to the hospital to get a checkup. The doctor said, “Because it’s a very serious injury, he cannot dance or do any other strenuous activities with his leg.” Consequently, Minho was unable to participate in G-Dragon’s MCountdown stage.

Afterwards, the trainees went to see YG’s CEO. Yang Hyun Suk said, “If the leader that is the team’s pillar becomes injured, what will happen now? Since this is an emergency, let’s change leaders. Kang Seungyoon will be the leader now.”, and gave out his decision.

After suddenly changing leaders, Song Minho said, “I feel like breaking down.” Lee Seunghoon also commented, “After seeing him get hurt and slowly sinking into a dark state, I feel very upset. I’m very worried for him.”