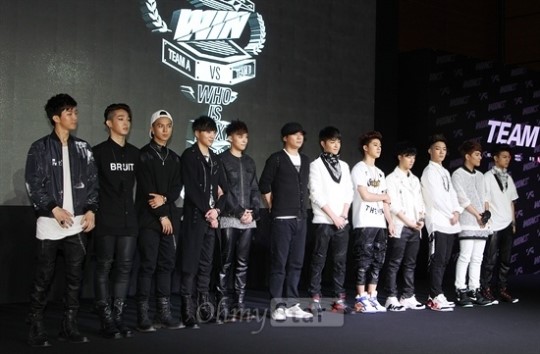 YG Entertainment will depend completely on the public this time to pick the first boy group in 8 years since BIGBANG’s debut. The 11 trainees at the entertainment agency will be divided into Teams A and B to seize the name WINNER to become a professional boy group. This survival program called WIN (stands for Who Is Next?) will be aired on Mnet and tvN.

The program, ‘WIN’, which had been drawing much attention since it was first announced by YG’s founder Yang Hyun Suk about 2 months ago, is finally unveiled to the public. On August 20 at Conrad Hotel in Seoul Yeouido, Yang Hyun Suk was receiving questions about WIN at the Production Sneak Preview. He started off by saying, “BIGBANG helped YG become mainstream. I hope WINNER will be the next boy group that will maintain YG’s reputation for the next 8 years,” and moved on to answer the 4 questions.

Question One. Why depend 100% on the viewers?
As the founder of one of the largest entertainment agencies in South Korea, YANG has an experience of putting BIGBANG and 2NE1 at the top of the music world. He discovered artists like Lee Hi and Akdong Musician, working as one of the judges on SBS’s K-Pop Star. But now he returns with a different method to produce the first boy group in 8 years. He said, “For the last 15 years I have been heavily involved with what’s happening at the agency, so now I want the public to be completely responsible for making the decision.”

“As the judge of K-Pop Star, I realized that the judge’s decision takes a big portion of the final score. So this time, we are going to take in 0% from the judges in the three battles, and have the public decide. 100%. The public is unpredictable. As an entertainment agency, we think, ‘it’d be great if the public like what we like’, and now is the time to ask the public to make the decision. I think what I have in mind and what the public think is not that different.

In fact, if you ask me to choose between Teams A and B, I can’t. (Laughter) I ask around when I can’t find answers, and now I am asking the viewers for one. I thought the viewers’ decisions also deserve to be respected and the selected team could make a debut.”

Question Two. How are Teams A and B divided
WINNER is a competition between Team A with the average age of 20 (SONG MIN HO, KIM JIN WOO, LEE SEUNG HOON, NAM TAE HYUN and KANG SEUNG YOON) and Team B with the average age of 17 (KIM JIN HWAN, BOBBY, B.I., SONG YUN HYUNG, KOO JUN HOE, and KIM DONG HYUK). On August 20 at the Preview, they showed a part of the preparation process and also made an appearance to deliver their greetings to the fans. CEO Yang said, “Team A, on the surface looks like they are in a more advantageous position because of two of the members who are already well-known to the public through Superstar K and K-Pop Star, but Team B is more competitive at this point. Team A is afraid of Team B. That is how talented this younger team is.”

“Team A is different to B because of their height. (Laughter) Team B is still young, so they’re still growing. But BIGBANG members are not that tall either, so Team A members’ height makes me think that they are the first group we produced. Team B is more focused on hop-hop. There is a rapper in Team A as well, but their genre is more diversified.

I am human too, so I feel closer to those trainees who were at YG longer, and to those who work harder. In Team A, KANG SEUNG YOON and a remarkable rapper SONG MIN HO are the two. In Team B, B.I., the diligent one since he was very little, and BOBBY, who’s been through a lot and developed significantly at YG.”

Question Three. How is WINNER different from BIGBANG

BIGBANG is highly praised in the music world for setting a new paradigm with their astonishing musical talents and all members being involved in composing, writing and producing the songs. The upcoming boy group must be feeling the pressure to succeed the reputation. When told “people would be comparing them to BIGBANG,” CEO Yang nodded, “it’s something I have to solve and is the biggest task for me.”

“If the public thinks its another BIGBANG, then no matter which team wins, the group would be a failure even if they gain huge popularity. But YG never made a group that overlapped with one another. But if the audience thinks the new boy group overlaps with BIGBANG, then that is a complete failure. I helped YG artists make a debut but I never ‘made’ them. I am not going to ‘make’ WINNER, I’m simply going to watch.
“I’m only here to implement a system for those trainees who have no knowledge in the field. I don’t tell producers and composers what to do. So I am not going to ask WINNER what to do. I am going to find their colors and implement a system for them, and that’s YG’s competitiveness. So I myself have no idea what songs WINNER will sing or clothes they’ll wear.”

Question Four. What happens to the losing team

The winning team will be given the honor to make a debut immediately after the program finishes, but there is nothing left for the losing one. ‘WIN’ follows the exact formula of ‘winner takes all’; a true survival reality show. To this, CEO Yang commented, “It could look harsh and cold but it is something everyone has to go through in the professional world. It’s like people taking the exams for university entry. The results depend on their talents and what they’ve got.”

“If there were a big gap between the two groups in terms of their musical talents, then it just wouldn’t work. It’s not good tactic. Many ask if the losing team would be broken up, and it could happen. The group may break up or the members may change. That exact group will not make a debut. We are not going to deceive the public. But I believe the public awareness will rise for the losing team as well because they will be introduced on TV.”