Huh Gak made a cameo appearance on the January 6 broadcast of High Kick: The Short Legs Strike Back (High Kick 3) and reenacted the stage of an audition program.

In the episode, he competed with Kang Seung Yoon, his former rival onSuperstar K2, over the role of a singer in a drama that Ahn Nae Sang is casting. 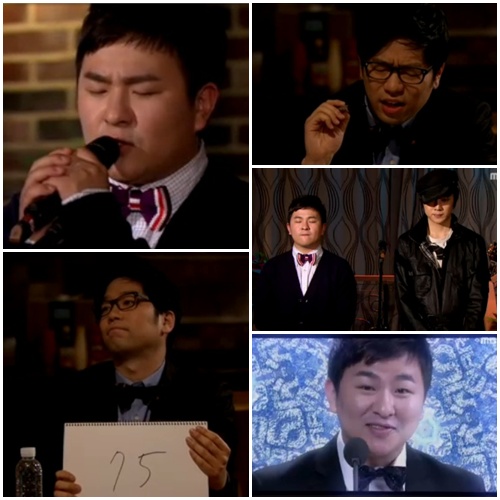 Huh Gak and Kang Seung Yoon sang Running in the Sky and Instinctively, respectively, as they did inSuperstar K2, and were judged by Ahn Nae Sang, Lee Juck and Park Ha Seon.

After Huh Gak finished the song, Lee Juck said, “The song choice was brilliant. The original song is great, but it would be better if you had been more faithful to the feel of the original song. In real life, Huh Gak was highly acclaimed when he sang the song in the audition program.

Notably, Lee Juck even demonstrated how to sing it ′right′ and ended up giving him a mere 75 points. On the other hand, Park Ha Seon said “That’s moving.” with tears in her eyes and gave him 99 points while Ahn Nae Sang gave him 100 points.

But at the end of the episode, Huh Gak became the real winner, as he debuted as an actual singer and on television, taunted, “Kang Seung Yoon, are you watching me now?”